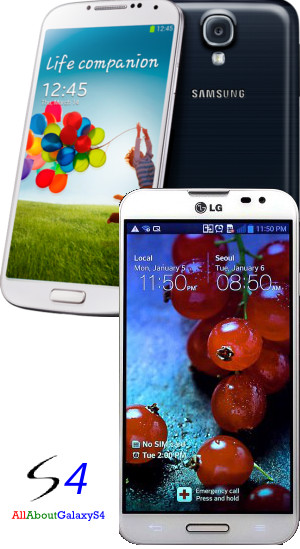 Samsung favors plastic and is often teased by competitors. But this does not hurt the popularity of the Galaxy product lines. Plastic to plastic, we have to say Samsung did a better job in S4 than LG in Optimus G Pro.

So, in this round, Galaxy S4 wins.

LG Optimus G comes with the old Jelly Bean 4.1. Although LG will surely update it to Jelly Bean 4.2 (as in Galaxy S4). But you do not know how long it will take.

Samsung gradually builds its reputation in Android update for their handsets in last 3 years.  Now Samsung usually is the first manufacturer in shipping latest Android (except Google) in their high-end smartphones. More importantly, most owners get at least 2 major updates in Android versions. In updating Android version, Samsung now is only second to Google.

For the skin, TouchWiz is over-bloated.Unfortunately, LG’s  Optimus UI is simply worse. The Optimus UI has some nice features, but it is clumsy and counter-intuitive.  Anyway, TouchWiz is more matured and polished than Optimus UI.

In this software and skin round, Galaxy S4 wins again.

As in the comparison of Optimus G Pro to Galaxy Note 2, LG got about 6-month lead in hardware specs. The 13MP camera, and the coming update (it is a bit funny, most users haven’t got the phone, but a big update was announced already) really makes it a good phone camera.

But if we compare it with Galaxy S4, the advantages Optimus G Pro enjoyed over Note 2 disappear. Both have similar hardware specs and similar software enhancements. The update yet to be released is like another copycat of Galaxy S4 (or it is just coincident)  .

So, for camera and video, it is a tie.

Both Optimus G Pro and S4 come with full HD display. Although Optimus G Pro has 10% lower pixel density (due to larger screen size), it is beyond the capability of most people’s eyes to differ such difference.

The major difference is between Samsung’s AMOLED and LG’s IPS. In a previous post, we compared different display panels in smartphones. For most users (non professionals on photograph) AMOLED is a better choice, the color is more vivid than that in IPS. Of course, for professionals, IPS generally re-produce the color more accurately.

So, for display, it is a tie again.

I seldom give verdicts because it is too difficult to do so.  So, I normally let readers to have their own. But for this case, Galaxy S4 is obviously the winner.  If LG had kept Optimus G’s design (distance itself from Galaxy Note 2), and polished the UI aggressively, it would have been too difficult to give verdicts.

What do you think?