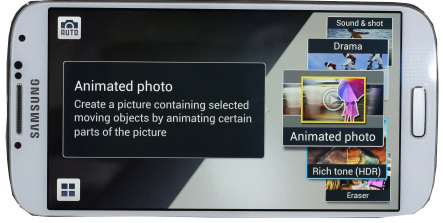 Update 1: FAQs were added at the bottom of this page. PDF version of all these FAQs can be downloaded from this post.

Animated Photo in your Galaxy S4 can turn your short video into animated GIFs.

The reason of using an animated GIF instead of a video sometimes is the file size. In addition when you put a video in a webpage, quite often some users cannot play it. But an animated GIF does not suffer from this issue because most browsers support it out of box.

Once in Animated photo shot mode, if you keep your camera steady,  the tool will suggest areas to animate. This usually is correct and you do not need to do anything.

You can also trim the video, and decide the beginning and end frames after it is taken.

Once the photo is saved, you will only get the animated GIF. The original video is apparently not saved. The length of the video is limited to 9 seconds. The good thing is that this GIF can be opened in almost all devices.

Q1 : A brush-shaped icon appears in the photo.
A : It indicates that the file is a GIF file taken in Animation mode.

Q3 : When I run a slideshow using images that include ones taken in “Animated Photo’ mode, the Animated Photo doesn’t “animate”. What should I do?
A : When viewed using via gallery, the animated photo shows the movements of the original saved image.
But in the slideshow, the static thumbnail photo will be shown and so without movement although the source picture is an Animated Photo.
It’s a concept of GalaxyS4 and normal.