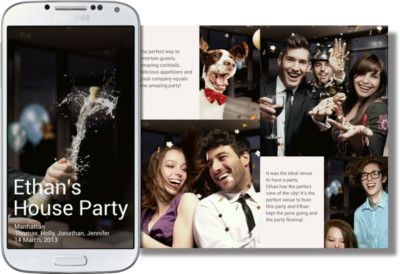 Update 1: FAQs were added at the bottom of this page. PDF version of all these FAQs can be downloaded from this post.

With the Story Album, you can create a digital album for every occasion.  Galaxy S4 can organize your photos and create albums based on specific events or customize them the way you want.

You can even apply themes and choose various layouts. Then print the photos and hold the memories in your hand.

Album can be created automatically  using tag information. Alternatively, you can manually select individual photos to be included in the album.

When you take photos at one location, the device automatically sorts your photos into albums based on your specified criteria and suggests making the new albums. To achieve this,  tap menu button, go to Settings-Home city, and then set a method for recognizing your location. Select an album type and set a minimum number of photos. When you take photos that meet the criteria you set, the device will suggest making an album.

Once the album is created, you can edit it by adding or removing some photos, change the cover photo, modify the layout, and send it to a Samsung printer to print. Of course, you can share and export the album to other devices.

The following video illustrates this feature.

Any questions or tips on this feature? Post them in the comments section below, or discuss them in Galaxy S4 forum.

Path : Story album → Select album you want to transfer → Share via through menu key → Choose the option ‘Image file’ or ‘PDF file’ or ‘Story album file(.ssf)’
If you are unable to view a Story album you have transferred to another device (that does not support the Story album), you must transfer by ‘PDF file’.

Q2 : There is number is displayed in the Story Album icon. I want to delete it.
A : It’s a count of recommend albums.
When you take a lot of pictures in a day or while travelling after turning on the ‘Event albums’ or ’Travel albums’, albums will be suggested and then the number is created accordingly.
Path : Menu key from Album list → Settings → Event albums / Travel albums – here you can disable Event albums and Travel Albums.