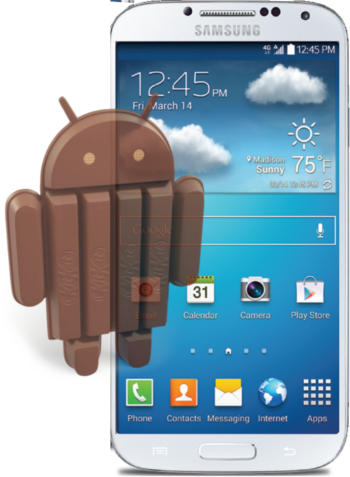 Because the system update need approval from individual carriers, you may wait a bit longer time than the others depending on the carrier, model, and region.

Galaxy S4 KitKat update: Samsung did it right this time

So far, after trying the Galaxy S4 KitKat update, I’m quite happy with it.

After getting the Galaxy S4 KitKat update, you will find the camera app shortcut in the lock screen. Essentially, you can snap pictures quicker.

This is a small, but very useful feature.

In Android KitKat 4.4, Google makes it easier to change launchers (of course, your home screen). Samsung did not crop this feature in this Galaxy S4 KitKat update.

Now after updating your Samsung Galaxy S4 to KitKat, you can easily change the home screen under Settings (Settings–General–Default–Applications-Home).

Of course, you will have more options if you install any other third-party launchers..

Galaxy S4 KitKat officially comes with a transparent notification bar. This means the notification  bar now works with all wallpapers.

One minor difference you may notice is that the green battery level indicator now is white.

After installing more and more apps, some operations can be performed by several apps, for example, opening  a webpage can be done in Chrome or the stock Internet app.  So, you have to setup a default app for such operations. Otherwise, you have to choose the app every time.

Sometimes, you may want to change the default app to other one. In Galaxy S4 KitKat update, resetting the default app is easy. In the task manager widget, you can quickly check and reset the default app. It is not necessary to go to Application Manager.

6. Hangouts as an unified messaging app

The new Hangouts app in Galaxy S4 KitKat update keeps all your messages, conversations and video calls together in the same place so you’ll never miss a message no matter how your friend sends it. So, the new Hangouts is a replacement for the messaging app.

One advantage of the Hangouts over Messaging is that you can share your location and send animated GIFs very easily.

If you feel uncomfortable with the Hangouts and want to switch back to Messaging, it is also painless: just go to Settings–General–Default applications.

With KitKat update,   Galaxy S4 can automatically hide everything except what you really want to see (book, movie, game..). Just swipe the edge of the screen to bring back your status bar and navigation buttons.

Samsung started their own support for emoji since Jelly Bean 4.2. You can find them in Galaxy S4 and Galaxy Note 3 even before the KitKat update. Such emojis works with Samsung own devices and iPhones (black and white only).

Android finally brought native support of emoji in Android 4.4 (KitKat). Most of the stock emojis are quite nice.   In Galaxy S4 KitKat update, Samsung added a few more emojis.

So, now you can enjoy emojis in more apps, and with more friends.

After getting the Galaxy S4 KitKat update, you will find that switching from app to app is easier than  ever.  Your Galaxy S4 is more responsive. This is due to code and memory optimization in Android KitKat 4.4.

Anyway, my experience with this KitKat update is far, far better than that of Jelly Bean 4.3 update.

You can also choose location method as high accuracy (use GPS+WiFi+Mobile  network), power saving (use WiFi+ mobile network), or GPS only.

11. Wireless printing is not limited to Samsung printers

Galaxy S4 KitKat update extends the wireless printing support to other brands of printer as well.

You can access the wireless printing settings at: Settings–Connections–More network–Printing.

Upgraded Google Mobile Service apps can be found in this Galaxy S4 KitKat update.  You can automatically back up photos and video to Google+.  You can open, view, rename and share Google Docs and files as if they are just local files.

What do you think about this Galaxy S4 KitKat update?

Please let us know your thoughts in the comment box below.