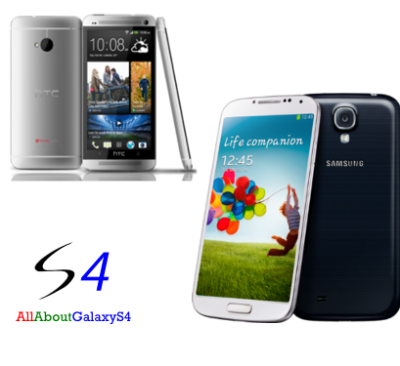 However, the battery in Galaxy S4  is removable; while the one in HTC One is non-removable. As today’s Li-ion or Li- polymer battery can only sustain about 400-800 full cycles (charge–discharge), your battery will lose capacity significantly after one year or something. For phones with removable battery, it is easy to fit a new battery, or prepare backup batteries for a long journey. You  can also replace the original battery with ones with high-capacity if you are a heavy user.

Round three: Software (OS and skin)

Both Galaxy S4  and HTC One come with Android Jelly Bean. But Galaxy S4 comes with the latest Jelly Bean 4.2.2, compared with Jelly Bean 4.1.2 in HTC One. You may check this page by yourself on the new features in Jelly Bean 4.2.  Surely, HTC is one step behind.

Android 5.0 Key Lime Pie will surely be announced in this May during the Google I/O 2013. Galaxy S4 users will very likely get this update based on Samsung’s current updating policy. However, HTC One may not get this update, or get it very late, because HTC is toooooooo slooooooooow in software update for old models. Samsung has a very good track record in software update for Galaxy S, S2 and S3. So, if you want to get more mileage of your phone, Galaxy S4 is the choice.

For the skin, both HTC Sense and Samsung’s TouchWiz are over-bloated, yet usable thanks to high hardware  specifications. So, the choice is up to user’s preference.

Clearly, the winner on software is Galaxy S4.

Round four: Camera and video

Galaxy S4 is packed with a 13MP rear camera; while HTC One gives a 4MP UltraPixel camera. UltraPixel sounds impressive, and can produce quite good photos in low-light conditions. But 4MP is still 4MP. Most buyers will still go to 13MP one.

Galaxy S4’s dual camera surely is a desired  feature. With Galaxy S4, you can use both cameras for one photo or one video.

So, Galaxy S4 wins in camera and video.

Round 5: Audio and speakers

I am not a fan of Beats audio, but HTC One’s front speakers (not one, but two) really make it stand out. Nowadays, smartphone is not just a phone: most users also use it for music and video. Front speakers are definitely better than rear ones. It is strange Samsung even does not bother to move the tiny hole (Samsung calls it speaker) to the bottom as they did for some tablets.

Don’t want to waste your time, HTC One wins in audio and speakers.

If you are going to use a case and enjoy new features in Android, Galaxy S4 is for you.

If you need a phone to wow your buddies (not using a case), HTC One is for you.

If you need use the camera for family gathering and travel, Galaxy S4 is for you.

If you are a heavy user and charge you mobile phone at least once a day, Galaxy S4 is for you.

If you want to get  reasonable quality sound from the speakers, HTC One is for you.

If you need use external MicroSD card, Galaxy S4 is for you.

If your buddies are using Galaxy  S4, Galaxy S4 is for you as well (for easy sharing).

If you have a Samsung smart TV in living room, Galaxy S4 is for you.

So, what’s your thought?