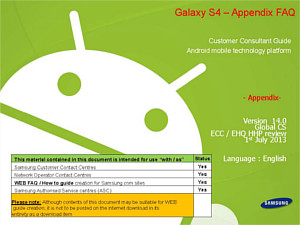 Galaxy S4 is packed with so many features, therefore it is not strange that a lot of owners have some sorts of problems or questions.

Although the S4 Owners Manual provides valuable guides and info, it is impossible to cover all aspects. Even some technicians in Samsung Service Centre may also have some doubts on some features and functions.  So, Samsung compiled 140 FAQs for Galaxy S4 owners. The documentation is intended for staff in service centres. Actually, almost all flagship Android models have the Customer Consultant Guide.

Anyway, in this guide, there are 140 questions and answers, which cover almost all S4 specific features. It is a good reading material if you are still struggling with your S4.

We are also trying to make an online page for these FAQs together with the User Guide. Once this is done by the end of this month, you can read all documentations online instead of downloading PDF files.

Here is link for download the PDF version of this Galaxy S4 FAQs (right click mouse button, choose save link as): Galaxy-S4-Customer-Consultant-Guide-FAQs

If you have any questions, or need help, … Read the rest 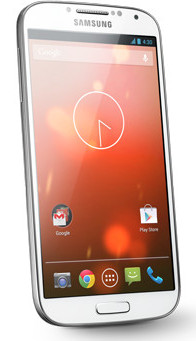